HELP IS AT HAND

We understand that from time to time, whether through illness or work commitments etc, your team may be short of a player. Netball Fun League has set up dedicated "Ringers" Groups on Facebook to help you complete your team for a match. On the "Ringers" Groups, Team Organisers or Team Members can post that they need a player or player(s). Links to the Facebook Ringers Groups are emailed to current registered team members.

In order to help keep our matches / teams / leagues as even as possible you MUST adhere to the Netball Fun League Ringers Rule when either “posting for a ringer” or “agreeing to play as a ringer”.

PLEASE NOTE:  That ignorance is not an excuse. YOU MUST CHECK WITH THE PLAYER THAT YOU ARE ASKING TO PLAY IN YOUR TEAM and confirm their previous playing standard.

(A) Players are not permitted to play more than 1 Division lower than the highest Division that they regularly play in. For Example: A player registered and playing in a Division 1 Team must not ring for a Division 3 Team

(B) There is an additional restriction on Division 3 players, they are no longer permitted to ring for Division 4 and 5

(C) If a player is not registered to a team, then their ability would be the deciding factor, and they should contact Netball Fun League click here and ask what divisions they are permitted to play in before their first match. Please see table below for guidance

(D) If a player has played or is playing in an England Netball County League, the entry level at Netball Fun League is Division 3. They do need approval from Netball Fun League for the appropriate division for their standard BEFORE they play. Please see table below for guidance

– If a team uses “ringers” incorrectly then they will be deducted 5 points from their league table,  and the team they were playing against for that fixture will be awarded 5 points.  If a team  continue to field an illegal ringer in subsequent matches, then  we will issue a fine of £30 to that team 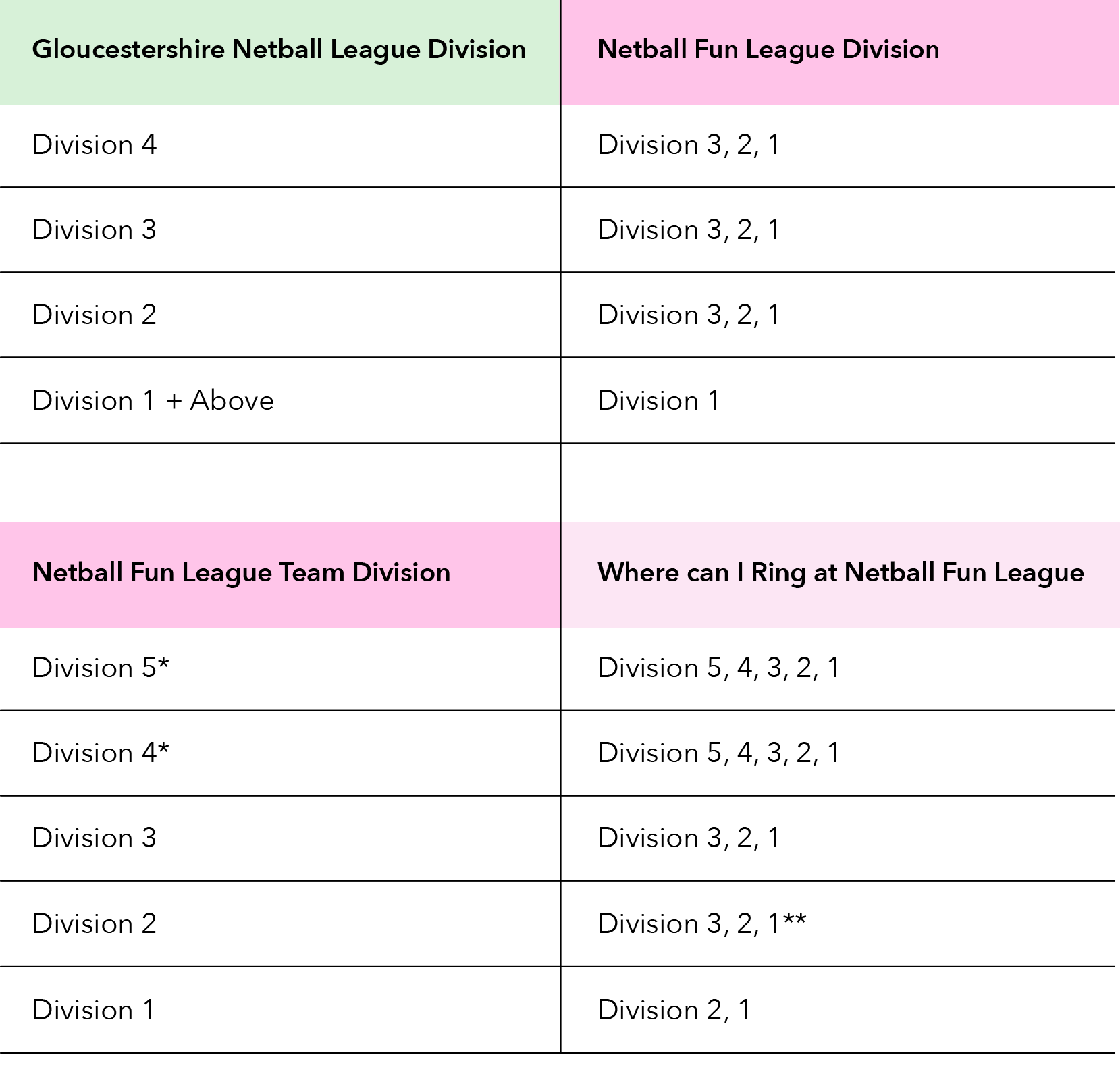 *If a County League Player is already registered to a team in a Netball Fun League, Netball Fun League “may” approve that player to play for that team but they will not be able to ring for that division. But you must obtain approval for this.

** Please note that there “may” be restrictions on some Division 2 players playing in Division 3 but we will contact you individually should this be necessary.

It is the players responsibility to obtain approval from Netball Fun League before playing. Failure to do this could result in the team you are playing for having points deducted.

If you have any questions, then please email lisa@netballfunleague.co.uk we will answer your query as soon as possible